What is a Retinal Artery Occlusion?

Why do I have a Retinal Artery Occlusion?

Most people develop an artery occlusion because an embolus becomes lodged in an artery feeding the retina and blocks blood flow. The source of this embolus is often the carotid artery (in the neck) or heart. Retinal artery occlusions usually occur in patients 60 years of age or older, and are more common in patients with a history of:

Assessment of a Retinal Artery Occlusion

We are able to detect a retinal artery occlusion during an eye examination. The affected retina often looks swollen and white, and a plaque is sometimes visible in the blocked artery. A Fluorescein Angiogram (FA) is usually performed to study the retinal blood circulation to fully determine the damage caused by the occlusion. If a BRAO is present, visual field testing may be performed to map the extent of the visual field affected. 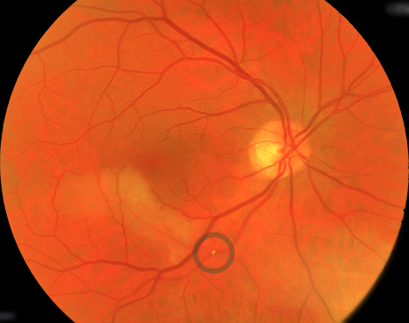 Clinical appearance of a visible plaque in a retinal artery causing a BRAO. The area of the retina affected by the BRAO has turned white. 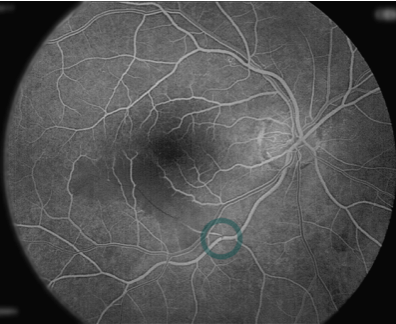 What Treatment is Available?

Unfortunately, there is no good treatment to reliably restore vision in patients with retinal artery occlusions. Based on animal studies, irreversible damage occurs to retinal tissue within 90 minutes of a blockage. If you are seen within 24 hours of the onset of your symptoms, we may perform ocular massage and remove some fluid from your eye to attempt to move the embolus downstream. If an embolus is visible, a laser procedure can be performed to try to break up the occlusion and restore blood flow.

If an embolus is seen or suspected, we will work with your primary care doctor to arrange for testing to make sure there is not an abnormality in your carotid artery or your heart that is releasing the emboli. This may include a carotid doppler and an echocardiogram. If there is an abnormality, it is important to identify and treat it as recurrent emboli can cause further damage to the eye or cause a stroke in your brain.

If you have any questions or concerns regarding this or any other information please call our office at 614-464-3937.